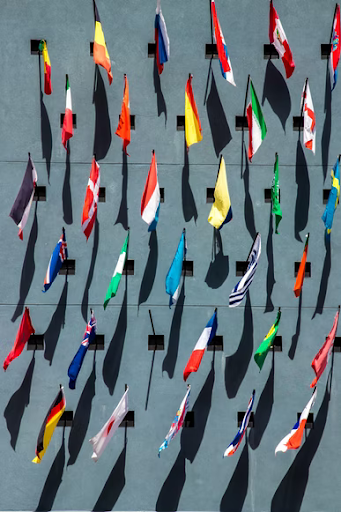 The tragedy of war, violence, and bloodshed has often been romanticised with little consideration to the realities they bear on the victims and the generations that follow. State propaganda espouses these inhumane undertakings that are seemingly necessary for the State’s endeavour to find its version of peace and stability; national interest. However, in reality, in the 21st century, the fundamentally accepted rule is that one State does not undertake any act of belligerence against another. Captured in Article 2.4 of the UN Charter, the Use of Force is simply outlawed. Despite this, the ongoing invasion of Ukraine by the Russian Federation again highlights the asymmetry of the perceived value of words on a document and its true value and its application.

Constructivist Alexander Wendt’s approach to international affairs is deceivingly simple: “Anarchy is what States make of it.” This statement presents multiple ‘givens’ in State interaction, such as anarchy being the basis of the international system. The order that stems from it is moulded on the basis of State behaviour and custom. The legal idea and principle of non-belligerence is an idea rooted in decades of inter-State warfare, and the tragic burdens that war has levied on people around the world. Ultimately though, adherence to this principle is a choice. And the repercussions of this choice aren’t set out within   a legal penal code but are based on counter-choices by other States, i.e. choice to vocally shame and condemn, economically sanction, or militarily intervene.

Additionally, there are legal ways to use force, noted as self-defence against an incoming act of hostility, as indicated in Article 51 of the UN Charter. The Allying States can collude and undertake collective self-defence, allowing third party States to assist and intervene on behalf of one of the parties fighting. Article 5 of the North Atlantic Treaty Organisation (NATO) essentially operationalises this on behalf of all signatories. Geopolitically, NATO’s inclusion of Eastern European countries and talks of potentially including Ukraine in the coming years presented Russia with a strategically threatened position. Yet, there was no premise or reason for Vladimir Putin to undertake a “special military operation” unilaterally, which violated the territorial sovereignty of its neighbour. International law failed to prevent or deter this invasion, (even if he didn’t formally declare this as a war) as it often has in various instances in the past around the globe. But it held a different value for different parties and non-parties to this conflict. The question remains: where does this value materialise and actually apply?

For non-parties, especially for countries that were delicately positioned between Russia and the Western coalition, such as China and India, international law served as a totem pole for guiding their statements calling for peace and a return to the rule of law – the law here being respecting territorial integrity. On the other hand, these States needed to balance their diplomatic and geopolitical interests, which could turn sour if they were to firmly adhere and call for action based on the written words of the UN Charter and the countless      treaties focused on non-aggression. International law’s value here was equivalent to the minimum buy-in in a game of poker; these States were willing to mention the principles and call (upon) the base requirement amongst players without indicating any interest in raising the stakes. India and China’s abstention of the recent UN Security Council resolution condemning Russia’s invasion is a soft fold. These countries will hold and strategically observe the (next round of) developments and then operationalise (or transgress) international law accordingly.

For the western coalition that is a party to the conflict, either by proxy or by virtue of the territorial threats posed by  westward-moving Russian forces, with the potential to destabilise      European peace and order, the value of international law is that of affirmation and confirmation. The repeated affirmation through statements, economic sanctions, and military defensive posturing is rebuffed by the necessity for States to respect international law. It also confirms that Russia is in violation of international law, thereby creating space for them to undertake actions (counter-choices) to raise the stakes (which can turn theoretically illegal) and prevent further violations. International law was never meant to be preventive here, but simply a customary hope- a promise for an extended period of “peacetime” and a  justification for hard power mechanics to be in place for its inevitable violation.

Looking back upon Putin’s statement declaring the “special military operation”, he presents justifications for this undertaking in well-founded international principles that have an evocative nature to them. Even though there was no premise or facts that confirmed Putin’s claims, he quoted “genocide”, “defending Russia sovereignty”, “crimes against civilians”. Out of context, an excellent premise for international military action. However, in context, there is no truth to the claim of genocide, crimes (against humanity) against civilians in the Donbass region, or a verifiable threat against Russian sovereignty. The reference to these noted issues in international law lends legitimacy to an action that otherwise would (and in this case should) be considered a blatant, unilateral use of force. The ultimate value of international law for States is legitimacy. Such behaviour is well documented in past unilateral actions, or non-UN permitted undertakings. The 2003 invasion of Iraq by the United States of America is a tragic example of this. Before the US chose to surpass the UN in its invasion, it presented its case to the UN Security Council under the guise of Iraq violating international law. The US elucidated that it was in the interest of the council to prevent further violations of international law and sanction military action against Iraq. Reflecting further back, the US’ war in Vietnam also utilised the legitimising value of international law to sell the war to the public back home. In these instances, it is essential to note that the configuration has always been that a ‘hostile’ party has violated international law, and the legitimising party must act in the system’s interest based on international law. Thereby, in its projection, the US presents the State as a reactionary protector rather than a unilateral belligerent.

Third World Approaches to International Law has repeatedly maintained that the majority of international law is actually just European law (for further reading Chimni 2006) that has been imposed worldwide due to imperialism, colonialism and the universal approach that followed after creating the League of Nations and the United Nations. To push this further, the moment of the invasion of Ukraine also revealed the application of international law has remained primarily European. Retracting the geopolitical lens from the events of 24-25th February 2022, while Russia launched its invasion in Ukraine, Israel conducted unsanctioned airstrikes in Syria, and Saudi Arabia (with US backing) continued its airstrikes in Yemen. No State from the western coalition called for a return to the rule of law, condemned the acts, or threatened to raise the stakes against the belligerents. These are not isolated incidents. These acts by Israel, Saudi Arabia, even the United States, Canada, France, Australia and Russia in non-European regions of the world are often side-lined or not given enough legal consideration. The convening of the UN General Assembly Special Session on resolution 337A (“Uniting for Peace”) over the occupation of Ukraine, but not over the occupation of Iraq, embodies this inconsideration.

This is not a blanketed allegation on European ignorance of conflict and warfare in non-European contexts. As the Ethiopian-Eritrean war and the recent rise in hostilities in the Tigray region have displayed, the European Union and the US have implemented economic sanctions against unconscionable hostilities amongst the African States. However, such responses have not been homogenous. In instances of conflict where Western investments and military interests were at play, international law has been pushed back to a secondary consideration or interpretation even moulded to accommodate geopolitical interests. The infamous forced OLC memoranda of the US-led invasion in Iraq in 2003 is a painful reminder.

This duality of application of international law represents the premise of violence existing in “remote” regions of the world and the acceptance of intended and chosen application of the rules that are supposed to guide international relations. In recent years, the lack of consensus or pace to shame acts similar to Russia’s by Western, Israeli, Saudi Arabian forces in Afghanistan, Iraq, Yemen, Palestine, and Syria captures the choice to apply or not apply the words that characterise international law. The questionable difference vocalised by American media about why the belligerence against “civilised and European” polities is more shocking than the situation in Afghanistan or Iraq epitomises this reality. It is clear that international law is simply not eurocentric, but its application is so.     .

The application of international law is often also racially and ethnically motivated. Refugee law promises refuge to any civilian fleeing war and conflict. The citizenship of the civilian is not a deciding factor in their plea for refuge      in a host State in times of war. However, the developing refugee situation due to this conflict in Europe has consummated a realisation about how race and ethnicity intersect in migration and refugee policies of western States. This realisation’s inception dates back to the 20th century but in recent years has created waves of tension and civil strife due to the second class treatment levied upon refugees of colour despite international law supposedly protecting them. Currently, on Ukrainian borders, countries of the EU have discriminated between EU and non-EU citizens, with African and Asian refugees fleeing Ukraine being held back on the premise that they are not actually      Ukrainian or European. If the attacking force is presenting itself to be indiscriminate in its aggression, as characterised by its use of missiles, airstrikes, and mortars – why is the humanitarian response discriminatory? Humanitarian law protects every human in a conflict scenario. In sharp contrast, its application in this crisis thus far has painted a very grave and different picture.

Lastly, international law is most applied post-facto, after the transgression has occurred. As seen, Ukraine is aiming to file a motion at the International Court of Justice against the Russian Federation based on the Genocide Convention, claiming that the Russians have falsely named genocide as the reasoning for its military incursion. Conversely, Ukraine has accused Russia of undertaking genocidal acts against Ukrainians. Both Russia and Ukraine are parties to the Genocide Convention. But there is no guarantee of participation despite this membership or compliance with any of the rulings of the court. This is referenced in the context of non-compliance or non-participation by the United States and China in the Nicaragua Case and the South China Sea Tribunal respectively.

The outcome of this value and chosen application will be deliberated upon in a subsequent article.

1 comment on “On Ukraine and Russia: The True Value and Application of International Law – Part I”